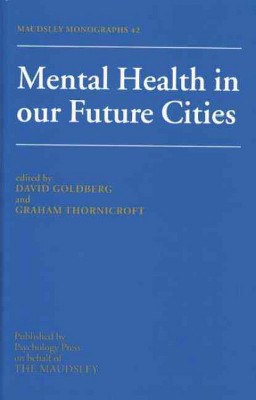 Yanaka, M. Ballester, A. Tietzman, A.

NATURE AND WELL-BEING in the Design of Contemporary Public Space

Thornicroft, Overview and Emerging Themes. Henry Maudsley, founder of the Maudsley Hospital, was the most prominent English psychiatrist of his generation. How was that going to work out?

Some good friends advised strongly against us being involved during the filming, warning of long-term harm to the children in particular. I felt uncomfortable, remembering this. As if they hadn't already been damaged enough by me and my illness, my suicide attempts What if this resulted in them feeling or being bullied or ostracised, stigmatised by proxy? I had to remind myself constantly: what was the point of doing this again?

Ah, yes. To help make the subject of mental illness more acceptable as a subject for discussion: to help fight against the possibility-and reality-of being stigmatised or ostracised or bullied simply for being or being associated with a common illness. Holding on to that truth kept the nerves under control, more or less. As did the certain knowledge that the decision-making and approval process for my and my family's inclusion in the film had been rigorous. Constant checks for permission and reassurance, repeated and ongoing family therapy sessions, lengthy and thorough consultations with senior psychiatric doctors - all that 'could' be done to ensure commitment to the project 'was' done.

So my last-minute edginess was not founded in any genuine doubt. I just wanted it to be over.

The family, minus eldest son, away at university, gathered at 9pm. Four of us were armed with connected devices for the purposes of second screening the broadcast; only my wife, a social media recusant, shunning the opportunity to 'watch' in the dual dimensions of TV and Twitter. They'd all seen the film before, too, part of the aforementioned approval process, which made flipping between the big communal screen and the little personal screen easier.

We all knew the rhythm and the tone of the documentary, where each of us appeared, and what we said and did. On Twitter, following the Bedlam hashtag, it was clear from the outset that the audience was engaged, interested, fascinated even; and overwhelmingly sympathetic to the joint and collective plights of the patients being filmed. A minor strain of old-fashioned 'Coo err' voyeurism, as at a Victorian freak show, pervaded the collective online text commentary; but in the main the comments expressed a sense of kindness, as well as of being gripped, and terrified.

I tweeted only once during the showing, to express mild surprise at the fear factor; although being a patient on the Triage Ward was undoubtedly one of the strangest experiences of my life, I did not feel fear while I was there, except as I arrived, which was fear of the unknown rather than of anything or anyone on the ward - even Rupert. Ah, Rupert. Such a great human being.

It was wonderful to see him again, even if only on screen. He was my first friend on the ward, and although he got moved on only two days after I arrived, he made a phenomenal impression on me. Although we have appear to have little in common, we soon discovered a shared love of music, poetry, London And although he was struggling to speak clearly at the time, we had some excellent conversations once I'd adjusted to his diction.

In particular, Rupert's sense of humour, especially about the situation in which we found ourselves, was such a boost for my lowering spirits. He cheered me right up, and I was sorry to see him go. Back on Thursday night, as the documentary rolled on and my own story was replayed, I began to feel uncomfortable again. I could remember the strain I was under, the almost-obliterating sense of confusion and desperation.

Seeing myself holding it together, recalling falling apart-that was tough. Some of the tweets turned hostile: how could he do that to his family, to his year-old daughter?

Just how selfish do you have to be to try to kill yourself not once but twice? The answers came back unbidden: do you think he could stop himself? Look how much he loves them all - do you think he made a sane decision to hurt them? There was a lot of good will and willingness to understand what mental illness involves, the helplessness of the genuinely suicidal depressive, the loss of sanity. There was also a great deal of humour. Then it was over. We were all laughing, reading out the tweets to Rachel.

I took a picture of the four of them, my daughters, my younger son and my wife, and posted it to Twitter in response to those concerned about the effects of these crises on my family's health and happiness. Of course damage has been done. Of course my suicide attempts have traumatised my family, and friends.